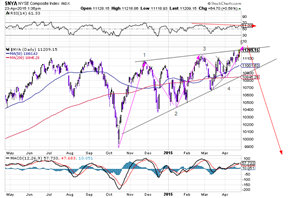 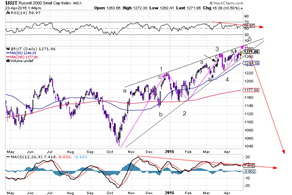 They come in all sorts of shapes but all are wedges. The structure is a 3-3-3-3-3, that is three legs up and two intervening legs down. Pretty simple but also very elusive as these things can go on for longer than you think. In fact, on the Russell we thought it was over about a month ago, where the little black arrow is. It was not. But fortunately the space between the lines is finite so we can now say that the RUT cannot continue for more than one month!

The other broad index, the NYSE has the same pattern but a little less sharp. If you look closely you can see that as recently as yesterday this index was trading at the same level as it did 10 months ago! Not much to show after all the efforts by nearly all the World’s central bankers to spike the punchbowl. In fact you cannot help wonder why they do not hire this British guy to spoof the e-mini S&P contracts and who was able to do 1000 points in a few hours without any money at all.

These wedges are very bearish patterns. Almost invariable the market drops back to the base and , more often than not, a lot further. These are, by the way, not the only indices that display these patterns. There are quite a few so there is all the more reason to take it seriously.