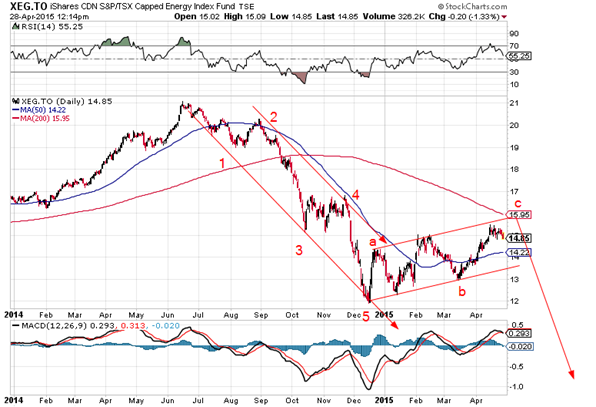 It is not often that you get a clean, unambiguous, 5-wave sequence. This certainly looks like one. Furthermore, subsequent to hitting a low in December of last year, this iShare has rebounded in what, at least to this point, looks very corrective. Perhaps to $15,95 to meet the 200 day moving average might do the trick. This would fit well with our outlook on crude oil that should retrace to about $60 in our opinion (see latest blog). As 5 waves never stand alone we would normally expect a continuation downward. Normally is the right choice of words as when we look at the bigger chart picture one could argue that the above 5 wave sequence is actually the second drop in a pattern that started a few years ago. 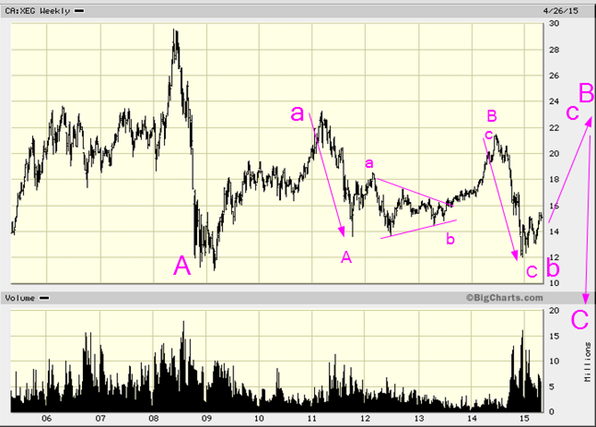 The big drop from $29 to $11 of course corresponds with the drop in crude from $143 to $31 or so. That was wave A. Following that you should get the standard a-b-c rebound which seemed to be complete early in 2011 having retraced about 2/3 of the original drop. Wave C down should have started and , being a C wave it must subdivide into 5 waves. So far it definitely has not done that which may warn that something else is going on. One possibility, and this is not all that farfetched, is that the a-b-c was not complete and become a lot more complex. The 4 year pattern, from 2011 to 2014, is very symmetric and could, perhaps, be viewed as the b in a more complex a-b-c. That could imply that we are now in c up towards, say, $23/$24. Only then would the big C down start.

A war between Saudi Arabia and Iran, which is already going on in Yemen, could easily escalate and, if that were not enough, could block the two straights through which a good part of the World’s oil travels.  For the sake of the argument let’s suppose that “conflict”is quickly resolved, but at the same time the World falls into a serious recession and also becomes more aware of alternative energy sources. The electric car becomes a workable alternative and GM announces in 2018 that it has just built the last 4-cylinder internal combustion engine! Who knows but energy is not all that clear right now.