This will be the last blog about wedges, expanding, contracting or otherwise. The Dow Jones World Index would seem to be an excellent choice as it should reflect the state of affaires as they exist today globally. It has always occurred strange to me that while central bankers all over the world seem to be unanimous in their desire to get rid of the “too-big-to-fail” among their flock, they themselves are almost religiously of one mind, conveniently forgetting that this single mindedness itself may pose a greater danger to the world economic and financial fabric. There is no more any academic diversity left, the whole world knows , with the  unwavering conviction of a moron , that the solution is Keynesian pump & prime, regardless of whatever the malady is or where we are in the healing process. The scariest part is that all of this is orchestrated by a handful of , unelected, individuals most of whom are alumni of the school of Goldman Sachs and one or two other , similar and compatible , institutions. Entire branches of economic thought, such as the Austrian school, have been unceremoniously dumped on the garbage heap.

Here are the charts; 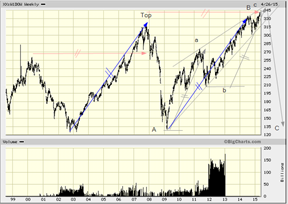 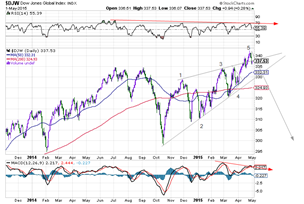 It is getting ennoyingly repetitious, but in the big picture we have the first two legs, A and B, of a a very large “flat”. C is next. As always there are a number of astonishingly precise symmetries . For instance, the a and c leg of the B wave are equal in terms of travel (in black)! Also, to the day (April 27) the three tops on the chart are equidistant from each other (in red). For EW-ers it is gratifying to see that wave A, after travelling about 200 points, stops within 5 points of the wave 4 six years earlier. If you take the recent Sept. high as THE high – possible if you assume a small irregular wave b – then the vectors are perfectly equal (in blue).

In the short-term chart the wedge is very clear, even doing a slight throw-over just to make the point that in a world where the battle cry is “doing what must be done” ( in order to get the market up and the trickle down economy trickling), unbridled optimism and faith in the system should be embraced. By the way, here too wave 5 is equal to 1 (both of c of B). The RSI and MACD are not confirming the new highs.

The question, as always, is what could be wrong with this analysis. After all a broken clock is still right on time twice a day. The count could be wrong and we are not in a B-wave but, instead, in a 5th wave. Even then it might be a wedge and just about complete, after all going up almost 3X in 5+ years is no mean feat however you slice it. This thing is ripe as a rotten plum, EW or not. We have seen this before, the world is flat, obviously otherwise you would fall off, but now, after numerous burnings at the stake, it is round but there are still quite a few that are not sure. It takes time.