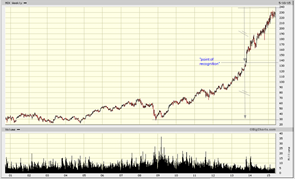 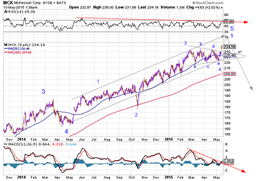 This drug retailer has done very well. There is nothing wrong that we know of with this company, but all good things must come to an end and in our estimation that point is close by, somewhere around $240 or so. Here are some of the reasons;

1. From the 2009 low this is one single wave, we think.  So even if this is not THE peak it is nevertheless a significant one. A correction of $100 or more is certainly a real possibility.

2. Looking at the short-term chart there appears to be a triangle wave 4 recently complete. The thrust up which is now underway should take the stock to about $240. That would complete the 5th wave that started at around $162

3. Both the RSI and MACD are at least not confirming the new highs.

4. Analysts, who are all bullish, have a collective target just above $240. As we have the greatest admiration for analysts we take heed of what they say.

5. The stock trades at a P/E that is roughly double that of  the rest of the market, which itself is not exactly cheap.

Other stocks that are in a similar position are Allegheny (Y) and Blackrock (BLK). From a risk/reward perspective they should all three be sold.