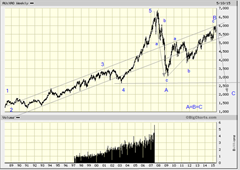 Using charts allows you to “prove” anything you want but, on the other hand, they also save you a thousand words which is why I am using two of them. This is the Bigchart and the Globe and Mail chart of the Australian index. This index should be of particular interest to Canadians as the two countries and their economies have a lot in common despite being at opposite ends of the World. Particularly their respective currencies appear to be listening to the same drummer. We suspect that this will change in the future as the “Britishness”, if there is such a thing, erodes and fades away, we hope, in both cultures.

There are a few things to take note of. This index has “behaved” exceptionally well as is plainly obvious at a glance. Looking at the longer channel in the G&M chart, in yellow, the index is content to stay within the confines most of the time. Very briefly, in 2009, it is below the channel but that is only once in 37 years. It is above the channel 4 times but seriously only in 2007 and , perhaps, now. Interestingly one must conclude that Greenspan was not looking down-under when he made his “irrational exuberance” comments in 1996 as the index then was pretty well in the middle of the channel. The reason we point all this out is that most people take EW with more than one grain of salt but nevertheless do subscribe to the inevitability of “regression to the mean”. That means going back into the channel, usually all the way to the other side and then some, as per the swinging pendulum.

In EW terms we are looking for a big flat which should normally take the index back to the level of the 4th wave on the way up and erase at least 50 to 60% of the 5 wave sequence that was completed in 2007 and probable started in 1974. Furthermore that should take the form of a three wave structure, an A-B-C where often the C is equal (as a vector) to the A. In many cases all three legs are vector equal (as is the case, more or less, in the Bigchart) but this is, of course, a function of choosing the relative dimensions of the units on the y and x axis.

A last point is that indices are measured in their own currency, in this case the Australian dollar, which means that if you are an investor with your feet firmly planted in the US you are misinformed. Better to look at EWA, the iShares that trade in US dollars; 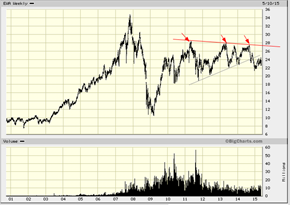 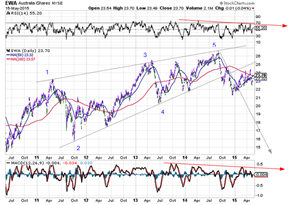 This gives a very different picture. First of all most of the recovery takes place immediately after the lows of 2009. Then there are 3 attempts over 4 years all of which fail while the average stays at the average set in 2009. This B-wave looks decidedly different from that of the index. We have done the same using Stockcharts, which is now only available for free for 5 years. The entire chart shows the c leg of the B wave, but for some inexplicable reason * rather than dropping, the three points are rising and together with the 4 points on the lower boundary, form an absolutely perfect “diagonal” or wedge. Enough said.

* ETFs can be shown by using the spot price  or as a total return value from some defined point in the past in much the same way as a mutual fund. We suspect that Bigcharts uses the former method and Stockcharts the latter.