Remember YUM, it had this expanding diagonal a.k.a. wedge that has to be a 5th wave of something. Well the SENSEX has a similar structure which also tells us that we are at the end of something, perhaps something big.

In the Bigchart we have drawn a circle that contains the cluster of numerous different targets obtained by using differing EW counts or other coincidences such as symmetry. Up to the middle to late nineties there was simple no interest in buying investments based on India, nor where there any vehicles to do so. Then that changed and together with many other emerging market funds or ETFs we, here in Canada, we got funds like Excel. As is usual, most actively managed funds did not beat the SENSEX, nevertheless that (say 2000) would have been a perfect time to buy into these funds as they were being “discovered”. Today, after going up tenfold in twelve years, that just might not be so perfect.

The very bullish outlook could be that we are presently in wave 4 of 3 of a super bullish up move. That could ultimately take the index to something like 60.000 or even higher. We simple lack the imagination to believe that that is actually a serious possibility and would rather stay a little more anchored in what we think is going on in most of the rest of the World. The two counts that seem most plausible then are a. we had a big triangle with a 5th wave thrust that has travelled a distance that is compatible with the mouth of the triangle, and b. we just completed a very big b-wave (which is at the edge of acceptable proportions!) and are presently in a C wave of a  10 year irregular flat. The circle contains at least 6 different points using these two counts. The targets for both these counts are not substantially different and point to 8000 or lower.

For the lazy reader we have repeated the YUM chart of the expanding diagonal, for comparison purposes, below. The jury is still out. Also we added the performance record for the Excel India Fund since inception in 1998. There is a pick-up on the hedge into C$ against rupees, but the MER for front end is 2.5%; 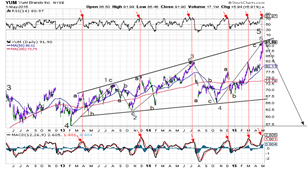 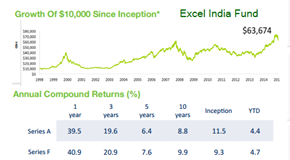