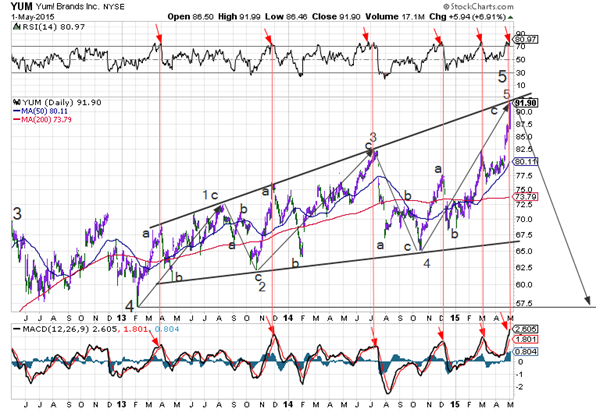 So yesterday this looked like a short, but as if to annoy us and prove us wrong, the stock shoots up almost $6, or 7%. So just to make sure we are not completely offside on this stock, we took another, in depth, look. This EW stuff is like doing a puzzle of a blue sky, you cannot see a thing for the longest time and then. all of a sudden everything rapidly falls in place. This is a two+ year expanding diagonal triangle, 5th wave that completes this entire bull run. What is more, we are 99% sure of this.

First of all, looking at the Bigchart, you will notice that wave 5 travels the exact same distance as wave one. This is a perfectly normal phenomenon when wave three is extended.  Next, the whole thing adheres nicely to the channel even though the possibility of a quick $5 throw-over to the uppermost trend line cannot be entirely excluded.

Looking at the shorter term chart the wedge is clearly visible and defined by no less than 8 touch points. We are using a semi-log scale as it shows better. This wedge is different than the “normal” one in that the amplitude of the moves increases rather than decreases.  In the end it resembles a horn. The main characteristic of these wedges is that they are ending patterns. Typically the stock reverses on a dime and drops, rather violently, back to at least the base of this structure. In plain English, this stock will trade at $57.50 or less sometime into the near future – typically in half the time or less that it took to go up, so roughly in six months to a year.

Also take note of the very accurate predictive value of the RSI and MACD, individually or combined. The red vertical lines are occurring at an ever increasing frequency and are basically done. This should be traded with options;

These are the puts as per Bigcharts as of yesterdays close. The October option is 5 1/2 month away from expiry, sufficiently long to do the trick but not too long to make it unreasonable expensive. If you buy, for instance, the 90 strike – just a little out of the money – the ask is $5.70 and in our scenario the value of the option should rise to roughly $30, that is 5X! Interestingly there is a gap at about $82 and it would not be surprising if the stock drops so rapidly that it leaves behind an island. As always, talk to your broker.

Fundamentally speaking YUM! owns about 7000 restaurant outlets in China, mostly KFC. This is their largest revenue source. So Yum is actually a great China play. in disguise.