This “insurance” company started life in the Far East. It’s founder was a Cornelius van der ….., Dutch in other words. Around the 2nd. WW the company moved to the US. It operates everywhere and insures just about every S&P 500 company as well as half the people that are on a Who is Who list. In short, they are big and everywhere. They were also the biggest private corporation to receive a bailout package, totalling a little over 200 bln. They pushed the envelope in every direction particularly in the area of derivatives, credit-default-swaps and so on. They were a counter-party to every bank that counts and also to Government sponsored enterprises such as Fannie May, Mac etc. After the great recession they continued to behave rather badly  in terms of paying bonuses, share buy-backs, palace revolutions etc. Here is the BIG picture; 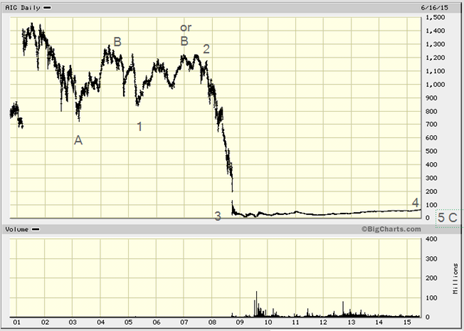 The shares never actually traded at $1500: that price is obtained by adjusting for various reverse stock-splits. The action after 2009 is barely discernable so we have the more detailed chats; 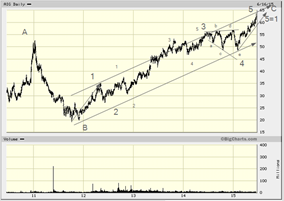 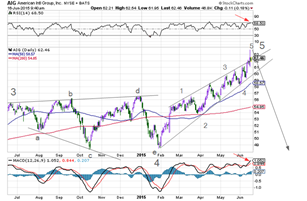 From the low in 2009 it looks like the stock traced out an a-b-c corrective rally. The c, as far as we can tell, subdivides neatly in the required 5-waves and has the added bonus of what might be an expanding triangle in the wave 4 position. Also, wave 5 is now equal to wave 1, a common occurrence when wave 3 is extended,as it is. That 5th. wave has all the attributes of a wedge, including a nice throw-over to end it all. We are sitting right on the upper trend line and both the RSI and MACD are stretched to the limit. In short, this is a sell.

There are some relatively cheap options available, such as 65 strike in August for about $3.50. We would prefer options as there is an OUTSIDE chance that we are looking at a take-off situation, i.e. where we are at the start of a third wave. We would put that on a par with Donald Trump becoming the next Fed. chair.