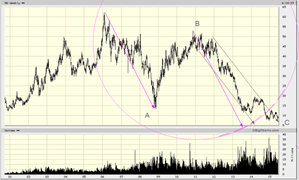 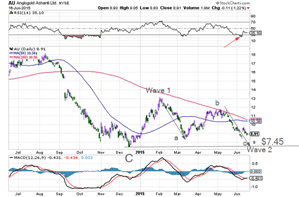 Last time, March 8th, we were still a little bit on the fence with regard to where this stock could go. Now we are prepared to take a stance in favour of going long at a price below the most recent low of $8.43 and above the December low of $7,45 Given the relative size of the last two down legs we must assume that they are both part of an a-b-c correction of the initial up wave in a new bull phase. In short, this is a buy at <$8. The initial target is at $13 and then at $20. If I was a good salesman , something nobody has yet accused me of, I would point out that your gain would be about 20% greater than this as this is in American Dollars!