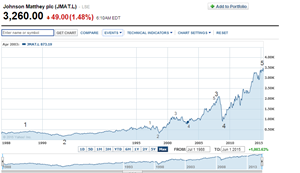 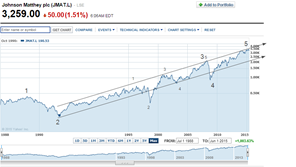 You have to read the name twice to get it right. These guys have been around for over two centuries. I know them from the time I did the funding for Bank of America in Amsterdam, around 1975. At the time they were , among many other things, money brokers. They are best known for there precious metals refining and assaying business. In 1852 the company was appointed as the Official Refiner and Assayer to the Bank of England. That is the equivalent of being invited to tea by the Queen, only more durable. It is a very prestigious company, comparable to the likes of Barings that started with that other precious commodity, wool. Both met, or almost met, their end as a result of reckless and speculative financing activities. Both were sold for one pound, JMAT in 1984 by the Bank of England that could not bear the thought that one of its few chosen banks might go under and display all the dirty laundry. Since then it has all been uphill.

We show both the linear  and the log-scale charts. Some of the performance may be due to the company’s involvement with the auto/truck industry. It makes all kinds of catalytic convertors  which is a logical extension of the platinum/palladium refining biz. The count is not perfectly clear but the channel is. The stock has now been creeping along the upper trend line for some time. From the recent lows it has more than tripled and consequently the risks are exceptionally high. Time to exit.