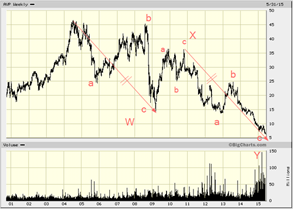 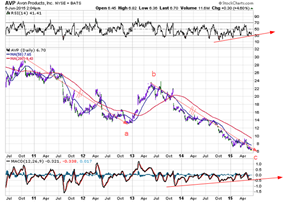 Avon is a multi-level-direct-sales organisation that sells perfumes and other such toiletries. It is a company for women according to the slogan and it has been around for more than 125 years. You may recall that in My Fair Lady the swindler was Hungarian. In the latest hoax involving Avon the swindler was from Sofia, Bulgaria and he too used the power of speech rather to swindle than teach by posting phony takeover bids. The important thing about that is that the stock was receptive to this sort of hype. In the future it should not take much to move it up a few dollars.

From an EW perspective the stock has completed (almost) an A-B-C correction down for which the proper labelling is  W-X-Y   don’t ask. The symmetry of this structure is absolutely amazing. Any moment now, give or take a few days and a level +/_ $6 and this should be ready to turn. RSI and MACD are both already on board. If, alternatively, one would argue that the (failed) top actually occurred in 2008 rather than 2004, the same equality relationships still hold with respect to amplitude (but not time). So the count is very robust.