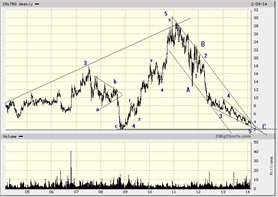 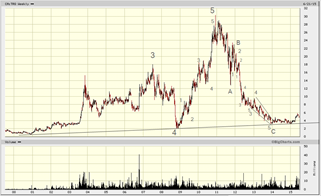 Turquoise Hill Resources – formerly Ivanhoe – had completed a full correction, an A-B-C, with all the requisite subdivisions , in particular a 5th wave wedge in the C leg, which confidently suggested this was a buy. It was. The low was at $3.17 and the high after that at $5.80 and we defined the break-out point at about $4. In short you could have easily made 30+% This massive mine is now owned by Rio Tinto (51%) and represents a significant part of the Mongolian economy. A collaborative approach to operating this asset is now in everybody’s interest. Consequently more upside is in the cards. In EW terms $10, the base of the wedge or wave 4 of C, is a reasonable goal.

Copper itself may not fare quite as well. It has not returned to the lows of 2008/9, not even close as this long-term chart clearly shows;

or in more detail;

Starting with the top chart, this is from the LME where they do things in pounds per ton, it is obvious that we are still well above the yellow 50+ year channel. So, if we were ever to regress to the mean, there is still serious downside potential, perhaps towards $2 or even $1.50 a pound. EW targets would be even lower than that, more like $1.25.

If nothing else, the long-term chart of copper shows how extraordinary this, give or take, ten year period from 2004 to the present has actually been. Linear extrapolation no longer has any predictive value.