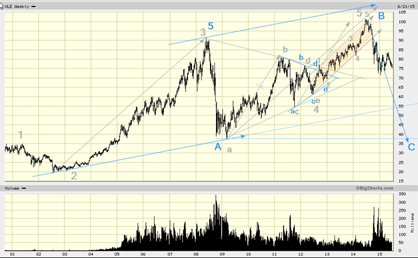 The little chart is from Sept. 2013, not quite two years ago, and the big chart is as of last Friday. We were a little early, always preferring caution to hope, but the main theme and the EW count has not really changed so now with the benefit of hindsight we can argue that the XLE needs to fall further to $55 as a minimum. Between $40 and $35 is likely and $20 a distinct possibility. Oddly, it does not matter all that much which particular interpretation you prefer, the triangle and 5th wave or the B-wave. The ultimate level does not, but the way you get there does! 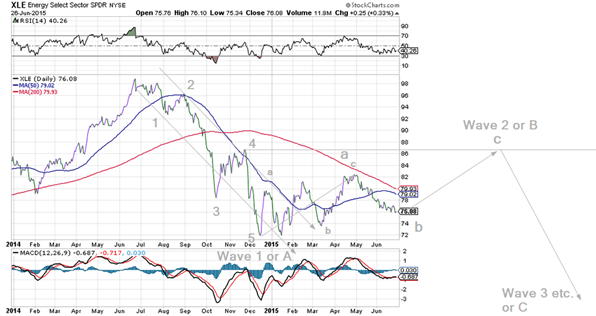 Here are some possibilities. Even if the substructures are not patently clear (is there a series of 1-2s?) it is clear that a first wave down was completed in Dec. or Jan. and that  a correction followed, in other words that correction is simple becoming more complex. Presently we are in the b of a more complex a-b-c correction. This can become irregular so a new low is still a possibility (RDS.B ?). Then we should have a fairly extended period in which the XLE makes tradable gains. Best guess is to wave 4 (of 3 or the entire sequence). Then it all breaks down again and $55 is within reach. This particular scenario fits best with the XLE having topped in 2014 (there is a 5th wave) and not with 2008 (a B-wave).This is because if there was a big B-wave we would now be in a c-wave down and C-waves must subdivide in fives so it is unlikely that wave 2 would elongate  as much as shown.

The XLE contains about 40 companies. Names like Exxon, Chevron, Schlumberger, Kinder Morgan, Conoco, Anadarko are all in there together with lesser names. The big ones dominate the index. As with all ETFs the stock specific peculiarities are evened out so the XLE does not represent any individual stock. WMB,The Williams Companies, as an example, made a new high recently. On the other hand, RIG, Transocean which is also in this ETF, is doing as predicted (see blog) and soon will be down by about 80%.