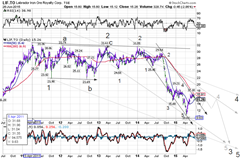 Royalty corporations really do not do anything, they simple own a stake in the underlying company which in turn pays them a royalty or commission. The main expense is salaries for the senior executives etc. but no real operating expenses. Not too much can go wrong, that is it is hard to get negative earnings. Even so this company saw its earnings drop by 61.9% yoy last quarter. That is an eye-catching Fibonacci percentage. If I am not mistaken this used to be a very popular income trust – also a flow-through vehicle – B.F, before Flaherty.

In EW terms, the eye-catching feature of the Globe and Mail chart, the big one on the left, is the picture perfect B-wave. These are dead giveaways that there is something terrible wrong in Labrador. After the peak wave C should carry the stock price to a new low, here about $10, and do so in a 5 wave sequence. In the detailed chart the four tops drop over time but not by a lot, this is in contrast to the G&M chart perhaps because they use monthly or weekly data instead of daily. The lower resolution gives a more grainy result but this can actually be a benefit as it filters out a lot of noise. All this leaves us guessing whether we are now in wave 4 of the entire sequence or just in wave 4 of 3. Either way we should go down at least to $10 but quite possible to about $5 or so.

The last 10 plus years the idea took hold that there was a shortage of iron ore and therefore the price could only go up. Ironically (no pun intended), iron measured by mass is the most common element on Earth and there never was a shortage. If there was an imbalance it would have been due to a burst in demand (China, Qatar, Dubai etc. or simple too much CB money manipulation ??). The chart below convincingly demonstrates that;

For twenty or so years the stuff is scraping the bottom and only comes to life in about 2001/2 Then it rockets from $10 to almost $200 peaking in 2011. That is roughly 20X. At around $60 today it is still well above (6X) the long-term trend so despite the a-b-c shown in the chart we would keep an open mind to further price declines.

Interestingly, the dates 2001 and 2011 have an awfully familiar ring to them. It is the exact same period in which gold made it’s move all though  it had a more interesting history before that. 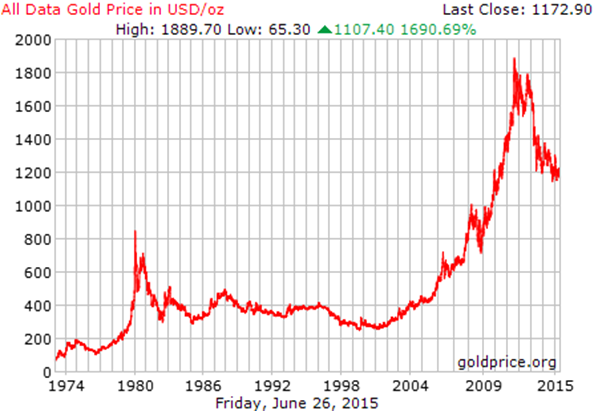 Roughly from $240 to $1900, or 8X. Presently it is still about 5X more expensive than in 2001. Who would have thought that when the financial world is about to blow up, you are twice as well off holding iron ore than gold! Even the most gullible investor  would not have believed that.