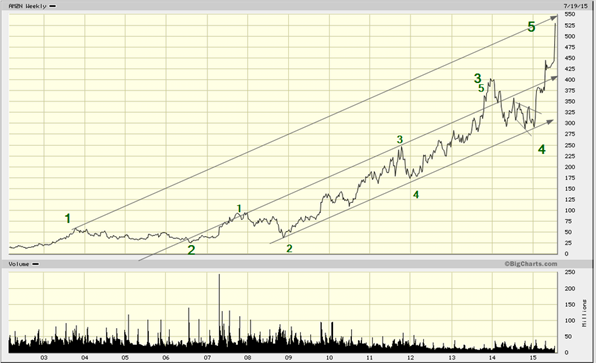 So it did not stop at about $500. In fact it shot up another $100 in overnight trading only to loose a good part of that even before the markets opened the next day. This is pure vertical and, perhaps, a “throw-over” depending how you draw the trend lines. At $260 bln. it’s market cap exceeded that of Wallmart, the World’s largest retailer and the US’ largest employer, by some $30 bln. Reportedly the main shareholder’s wealth increased by roughly $7 bln. in one single day, albeit only briefly. The detailed chart is more revealing; 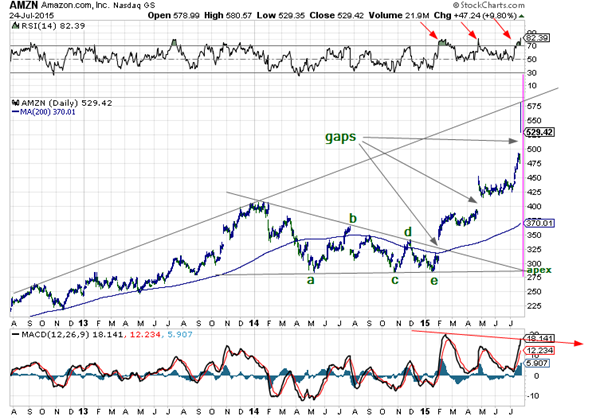 A number of things point to this being a top. We are at the trendline, at least we were briefly in after hours trading. If there is a triangle, we are vertically above it’s apex. There are three gaps in this wave up. The RSI is overbought and was so three times in the last 1/2 year. The MACD is deteriorating. The $100 gain overnight representing something like 17 to 20% of the value is completely disproportionate to the improved earnings as reported that day.

When the market sobers up on this stock we would expect it to be back at $300. That does not really change even if the stock has one more move up. This is RBC’s top pick. It wasn’t that long ago that they had little to say about .coms or internet companies. Now they want to display their financial acumen and simple have become part of the momentum problem. Their is an enormous self-fulfilling element in these situations and you play this musical chairs game at your own risk, they benefit both ways.