The expanding diagonal triangle is showing up in many different places, the most recent in ABX. We have had them work right to the extremes and in other cases they seem to depart  from the expected path a little early in the game. The Nikkei (see our blog of Dec. 28, 2012) which we got wrong, we got carried away is a better description, is instructive and provides a good lesson with regard to these wedge structures. Here is the Nikkei 225; 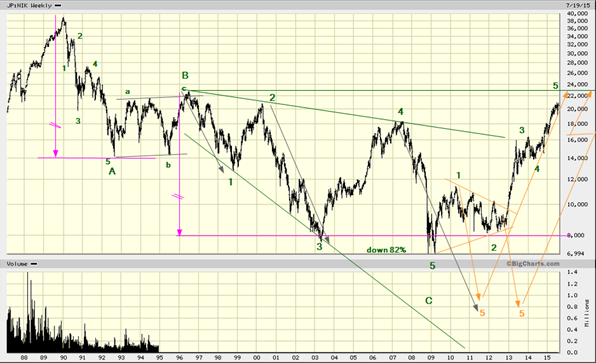 The diagonal occurs either as a 5th or a C wave. In ABX, the previous blog, it is a 5th wave. Here in the Nikkei it is a C wave. The main characteristics of this pattern is that it has overlap, normally not allowed, and that the amplitude increases with time as in an unstable equilibrium. The tensions are very high and nothing seems to be obvious which, perhaps, explains the violent retracement that invariable follows. Where we went wrong is that we expected to get closer to the lower boundary of the pattern. Each of the 5 legs within the pattern has to be a 3 wave affair. It all would have looked better if it had dropped another 2000 or so points. It might have if we had not had Abeconomics in about 2013. Japan was already running the largest deficit of any civilized country in the world, but that did not seem to matter as the theory had it that this island nation was borrowing from itself, so no problem. The Yen was taken down from 130 in 2012 to 78 today. Not quite but almost 1/2! The events in beige never happened but the return to the base line is almost complete, so watch out as then we could easily drop back to 14000 or even lower. 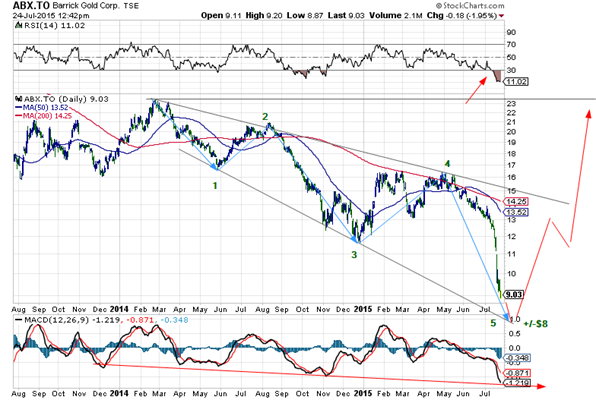 Using this wisdom on ABX, we know that it should go back to about $23. We know that an ideal low would be on the lower trend line but we do not know if it will get there. It may even exceed it by a fraction. It has already traded as low as $8.87 This is a double and even if the stock briefly trades at, say $7, the upside does not change.

Whatever causes the change, it is never expected. This must be so as otherwise the violent reaction would not happen.  Abeconomics was, and is ,  a completely idiotic approach which would never have been accepted were it not for the dire circumstances of Japan’s economy. The same was true for Ford when it decided not to follow the rest of the gang into bankruptcy in order to become eligible for big hand-outs. Perhaps in the case of gold the Fed. will awaken to the fact that perception is reality and will announce the creation of a rainy day strategic gold reserve fund and mop up all the excess supply. Below is the chart for Ford, just as an example. We nailed that one and NOBODY believed it. You can click on the charts, enlarge them and move them around to compare them. All three are identical except for Abeconomics. 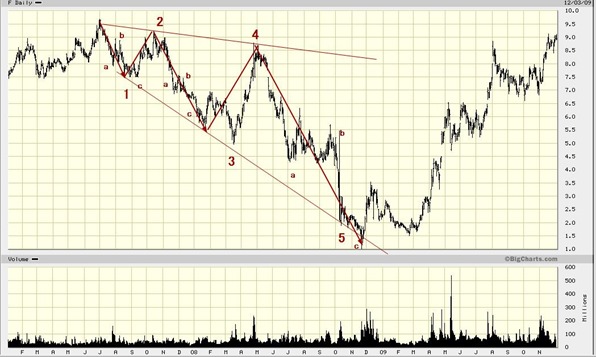 Note; Like Reaganomics, Abeconomics or Abenomics was coined to describe a previously non-existent economic approach , at least not in this mix of of fiscal stimulus, monetary easing and structural reforms. A soup of QE and Mercantilism plus a good deal of interference in markets etc. It is an experiment the consequences of which are unknown, certainly not at this scale.