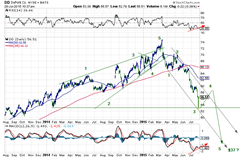 If we were ever to write the 10 rules of trading – do not worry as it will not happen -  then one of them would most certainly be step aside at the double top level. DD is a good example particularly as in this case there are no less than 17 years separating the two events. Double topping is very much like the Mount Everest phenomenon, you climb to 100 because it is a round number and because it is there. The reason for the rule is that once reached the target becomes truly meaningless, that is it is now recognized as such and consequently all the “motivation” evaporates.

Google charts has the second top at $80.66. Several other charting services have different numbers. Stockcharts has the recent peak at $74.66. Bigcharts has a different number all together. For our purposes suffice to say that DD is either doing a big flat or completed waves 4 and 5. Either way it should go down to, at least, $36 but more likely into the high teens.

We had a nice wedge going into the peak (we were not watching so this unfortunately is hindsight). That all but guaranteed a move down to about $52 where the wedge started. Presently it looks like that completed waves 1, 2 and 3. Next, and we will be doing that in the next few weeks will be wave 4 and then 5 to complete the first down-leg, either 1 or A.

This company is in the business of making commodity chemicals. Things like nylon, kevlar, gunpowder  and chemicals used in the agri-business. Last quarter they increased the dividend and this quarter they lowered it. We would sell at about $58 as it is not entirely clear that wave 3 is done. We could be in 4 of 3 and not 4 of the entire sequence.