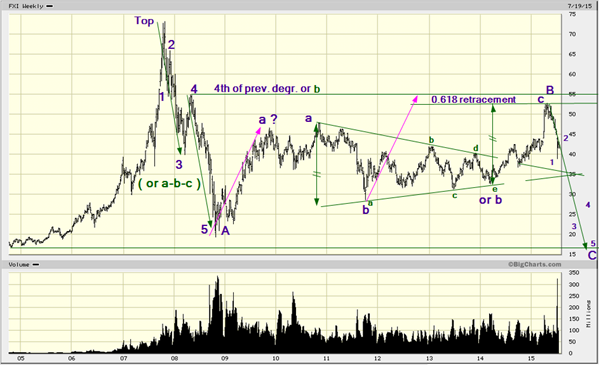 This is the iShares China large cap. ETF. We have shown it before some 4 years ago and were impatient then. Now we show the chart for the sheer beauty of it. It adheres to a lot of the “tenets” of EW even if it is not absolutely clear whether this is a double zig-zag or a large flat. Here are some of the astonishingly precise features.

a. The initial leg down is composed of either 5 waves or three waves in an a-b-c. The a and c legs are equal within a dollar or two.

b. The total retracement – in wave B – is precisely 61.8 % of the drop in wave A. Trust me I did the math with a calculator. Also it reaches, within a dollar or two, the 4th wave of previous degree or, alternatively the top of the b wave of A down. The total travel in the a and c parts is about equal (in purple).

c. The b leg in the B wave is clearly a triangle that is perfectly confined within two lines and the individual 5 legs  relate, alternatively , to each other by a factor of .618.

d. The mouth of the triangle perfectly predicts the size of the thrust from the triangle after wave e has found it’s bottom.

e. The top of the B wave or the thrust is above the apex of the triangle, at least roughly.

f. If we draw the coming C wave proportionate to the A wave – not equal as there is insufficient room – we get exactly at the starting point of this ETF which is where we should be heading.

The only thing that one could not have predicted, and we certainly did not, is that this whole process, that is the retracement, should take the better part of six and a half years. Normally it should have been two or three at the most. For this delay, that has no productive value at all, we can thank the Central Bankers. Amusingly one quasi member of this august club, the IMF, now has the gall to berate the Chinese for what they have learned from the Fed. Manipulation of free markets is now frowned upon, not in the US but of all places in China which no sane person considers “free” in the first place.

For the record, EW does not have any “tenets”. It is not a theory. It is simple the outcome of deductive and pragmatic observations. There is nothing to quarrel about.