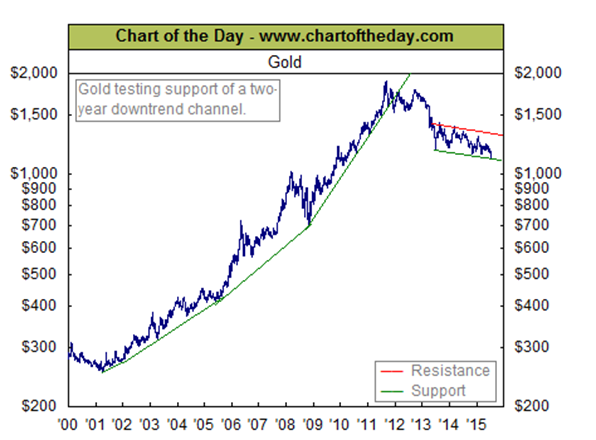 This is, of course, on a semi-log scale. These charts are fairly crisp, this one less so as i had to enlarge it. So here we see the 10+ year run from the lows at around 250 to the highs of 1923. In terms of inflation adjusted, or measured in purchasing power, the high is pretty well at the same level as it was in 1980/81. In other words gold essentially double topped. We have no idea whether or not the recent drop is just an intermission on the way to $5000 or more, or if this is the start of a huge correction. What we do know is that the largest correction during the ten years up was in 2008, from about $1000 to $700. This, regardless of what EW count one wishes to use, is a NORMAL retracement level. This is also at the average cash cost of $719, the level where miners actually stop producing. For an interesting take on this please go to    http://www.cmegroup.com/education/featured-reports/gold-storm-on-the-horizon.html   This is from the economist at the CME, Chicago Mercantile Exchange, sober and objective.

Concerning EW, if we are approaching a bottom of sorts, after 5-waves down, we should get 3 waves up for a B and then another 5 waves down, so first to $1400/1500 and then down to $700. All of this regardless of where we are precisely.