Please see some of the earlier blogs on the CRB, they were quite accurate and today we will try to repeat that. Originally we were obsessed with the idea that there was a large B wave from the depths of the great recession lows, if for no other reason than that it showed up in so many different places. We show that scenario in beige. You can find the 3-wave structure of the B wave in the 2011/12 blogs in great detail.

If that scenario is to be correct the developing C wave down must subdivide as a 5 wave structure. It could still do that as shown in beige. However, to date this move down from about 370 has all the attributes of a 3 –wave affair and very precisely at that. This does not preclude the 4 and 5 from being added in the next year or so but it does raise the question whether or not there is a serious alternative. There is. It is possible that the original B wave becomes more complex, that is to say that the drop from 370 to 200 is not a C wave in progress but a b-wave within the larger B-wave. Initially you cannot tell as in both scenarios the direction would be up.

Typically bubbles burst and the index, commodity, whatever trades below the starting point of the preceding bull run. That suggests that we are not done yet but un till we break 270 (overlap) we will not know for sure where we are. I prefer the beige scenario, with the C wave developing as a wedge, but the black one is very compelling, see below,both legs a and c are absolutely perfectly vector equal just a fraction below where we are presently; 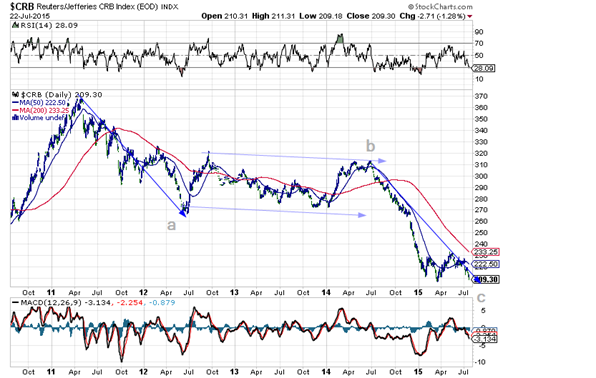 Note;  Another alternative would be a double zig-zag, as in a-b-c X a-b-c. The second a-b-c is in the Stockchart above. The whole thing would be complete ( which conflicts with a return to levels below the start!) More importantly for this to be so wave A would have had to itself subdivide in a 3 wave structure. To me, if anything, it looks like a straight line down without a visible intermission.