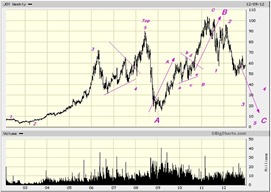 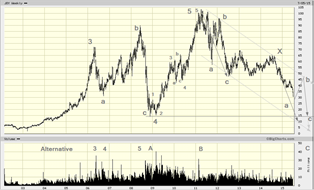 The prediction (by EW, not me!) was pretty prescient as the stock kept travelling down. However, the EW argument was dead wrong! At the time (see the blog) I mentioned the clear B-wave as that featured prominently in many other charts and seemed to fit the picture just fine. Looking at it again, that count must be discarded. If this was a C wave from the top of $101 it would have to subdivide in 5 sub waves without overlap. That is equally clearly not the case so the count on the left, in purple, cannot be. Instead I would now put the top of wave 5 where B used to be, so the correction starts in 2011 and not in 2008. Now the complete correction and not just a C wave, can become a double zig-zag that will go down at least to $10. But for the moment it does look as if the a part of the second a-b-c is about complete. For the nimble this may be a buy for a decent bounce of about $15 to $45.

JOY is the world’s largest manufacturer of underground mining equipment, about 60% coal and 20% copper.