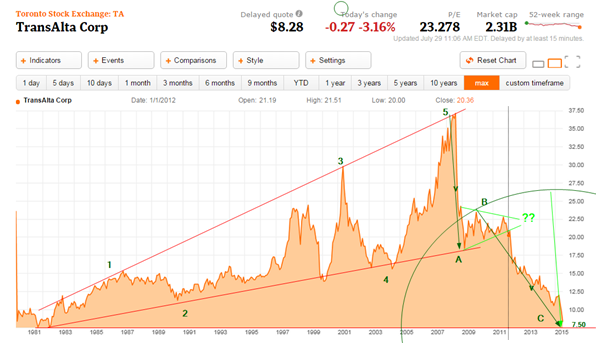 We are way too optimistic for this business, primarily because we used charts that did not go back far enough. In this modern day and age you would think that all chart services would be eager to go back as far as possible but that just isn’t so.

This Globe & Mail chart goes back to 1980 when the stock was $7.50. If we get vector equality between waves A and C, we will go back to that level. If the magnitude (vertical distance) of those two legs is equal we could hit $5. This is an electricity generating company, that is a utility. It is down 80% when utilities enjoy a wind in the back from cheap financing costs, i.e. interest rates. The $7.50 level is also the starting point of a pattern (the whole chart!) that looks an awful lot like an expanding diagonal which would then call for a return to that level.

There is a whiff of Enron attached to this stock. They have been found guilty of manipulating prices by orchestrating brown-outs or something like that. Compared to Enron that is nothing. Furthermore they are appealing the verdict at a higher level. Sooner or later all this will be forgotten. $7.50 is the time to buy, but then maybe I am too optimistic again.

10 analysts that cover the stock have, on average, a hold rating. The trailing p/e is around 23 and the yield about 8.70%, about the same as it’s profitability.

Below is a detailed view; 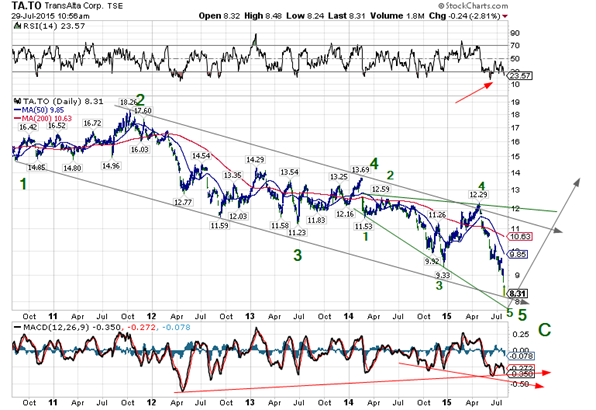