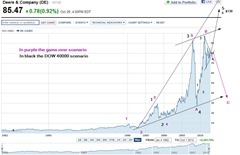 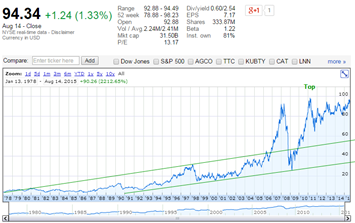 From the, almost 3 year old, blog you can see that we try to keep an open mind. EW is always about alternatives and the waves must show the way. If they do not, it is imperative that you do not draw unwarranted conclusions. Having said that we do think DE is a sell despite the fact that we are not sure what to make of the chart.

It took two years to regain all the losses during the great recession as the stock climbed to an all time high of $98.23. Another four years and the stock still has not been able to do better. Just for the historians among you, I have found some interesting bits of info that show how ridiculous the comparison with the Great Depression really is. From 1930 to 1932 sales dropped from $63 million to $8.7 million. Employment went down by 75% from 4,800 to 1,270 and salaried employees saw their pay cut by about 31%. The local bank was saved after two employees embezzled about $1.2 million and DE generously  injected a similar amount and effectively took over control. (see Sam Moore in Farm and Dairy).

We have referred to the tendency of stocks wanting to get to an even number, particularly $100 , as the Mount Everest phenomenon. If you ever tried that, I have not, you will know that if you do not succeed immediately you have to go back to base camp to recharge. Lately the stock got slightly above $97 so it succeeded at neither. It may still get to, say $105 but we would not hold our breath. About 10+% of the float is now held by shorts which may, for a change, be the right position to take.

If you live in the country enjoying the fresh smell of manure you are always amazed at how little tractors and other machinery is actually used. Most of the big stuff sits idle for most of the year and they do not wear out very fast. The purchase of these $150,000+ machines is consequently entirely discretionary and induced by income/wealth and tax considerations rather than “need”. Prolonged periods of buyer droughts are entirely possible and this would impact the stock. Between here and $105 we would be short this stock.

Kubota supports this view. It has a clear 5th? wave up from the lows measured in Yen terms. It is a formidable competitor with, in my view, a better product. 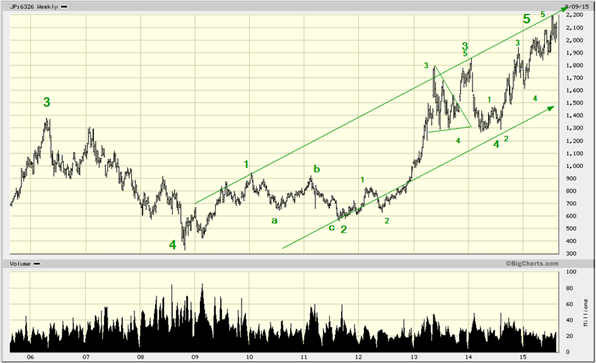