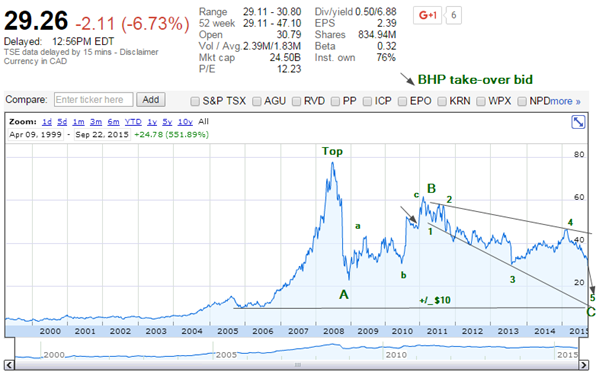 Back on July 30, 2013, when this stock was essentially at the same levels as it is today, we unequivocally opined that the drop was not over and that we should first get a 4th wave. We did even if it took longer than we would have expected. This is a large A-B-C in which the C will probable turn out to be a “diagonal”. This is normal for commodity stocks that typically have outsized 5th waves.

Potash is the product of a lot of engineering by the province to create a monopoly (or oligopoly). Not surprisingly then that the Premier got real anxious when there were threats to this business model when BHP showed an interest in expanding production and perhaps even stepping out of the cartel, this despite having advocated an open-for-business approach. Things went wrong because monopolies only work if the monopolist has the luxury to wait forever. As soon as some form of dependency is created the pull towards expanding production becomes irresistible.

You could have sold at $62 right after the bid. You have already lost half of that. If you hold and this EW interpretation turns out to be correct you will loose another 2/3 from here.