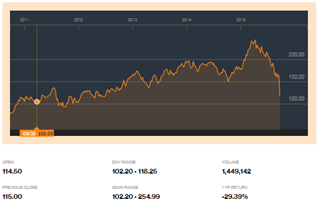 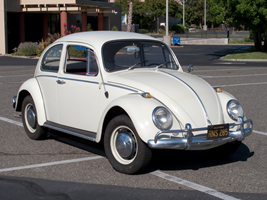 So Volkswagen stock traded as low as  Euro 102.20, coming from a high of Euro 254.99 that works out to a drop of 59.92%, very close to the 61.8% Fibonacci target. However it does not look like this is over. The bounce, so far at least, looks to be corrective. In addition the drop over the past few days is almost certainly, as we pointed out earlier, a 3d wave, implying that there must still be a 4 and 5 to come.

The company’s CEO is most likely going to lose his job. I cannot judge whether that is deserved or if he is just a scapegoat. No doubt he will be paid well if he leaves. The company has set aside something like 6 to 7 billion Euros to cover the damages. Estimates already go as high as $30 bln. but it will undoubtedly take years before the dust settles.

We show a picture of the ubiquitous and iconic bug. Just a few years ago it was still made in Mexico. A retro model is back in production. This particular model is not what the fuss is all about. It has an air-cooled petrol engine that sits in the trunk. It was developed in the pre-WW2 years by the Nazi regime as an economy or people’s car for the German roads. Together with the ten year newer (1948) Citroen Deux Chevaux (two horses) , it has been the transport of choice for the poorer classes. It has been the “brand” image of Volkswagen for almost 3/4 of a century. It is also used by others to conjure up a sense of economy. That brand is now seriously damaged and it remains to be seen how long it will take to recover.

The cheating was discovered by a small company, Curious Clean-Air Group, that found the gaming more or less by accident. This underlines once again how important sunlight is as an antidote to obfuscation in keeping us on the straight and narrow.

P.S. The CEO has resigned and reportedly had no knowledge of this matter. His pension at about US$ 32 mln. will start a little earlier and allegedly he could receive up to twice his annual salary of about US$ 16 mln. A free car is thrown in for good order. If this is your downside, risk taking does become a little easier.