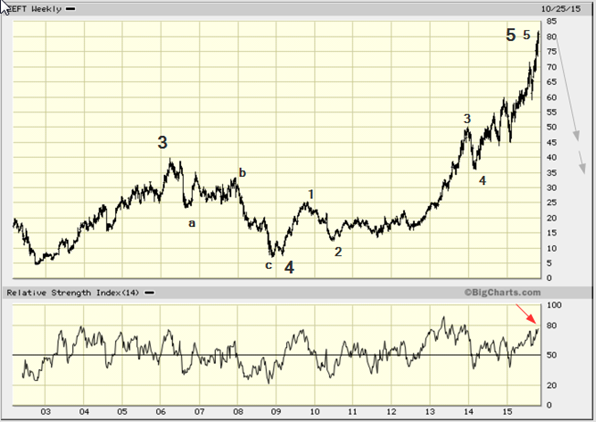 This company has been around since the late eighties and has it’s origins in Hungary of all places all though it is incorporated in the US. A good part of it’s business involves money transfers and FX transaction. It got a solid boost when it was able to muscle out Western Union (WU) and Moneygram (MCI) from their partnership position with Wallmart in 2014. If this sort of stuff tickles you pink then buying these shares in the past year or two would have netted you 1 to 2x your money back plus the original investment, compared to perhaps losing it all.

We do not like the stock anymore. 1. we are in the pure vertical stage, 2. it is possible to count a clear 5 wave move up from the lows of 2009, 3. the RSI is once again approaching the 80% level, 4. even though we are not quite there yet this stock is doing a heroic Mnt. Everest climb which would ideally take the stock to 100 but not necessarily, 5. the p/e is trading at a lofty 46x, about 3x the norm, 6. the business is quickly becoming commoditized. Every Tom, Dick and Harry is getting into the business and there were already too many players.

Definitely a sell here and certainly anywhere between here and $100. A reasonable first target is either $45 or $36 or so.

Note: We are confident that 5 waves up are complete or nearly so. Even so we are open to the idea that wave 4 might have occurred a little later in the sequence than shown, that is starting at $55. This would become more compelling in the event that the stock does, in fact, manage to climb to $100.