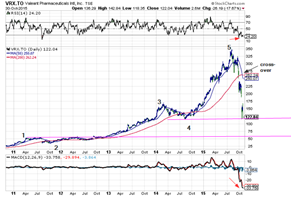 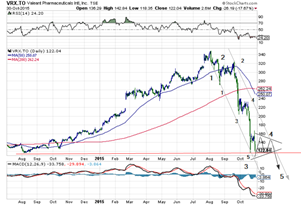 FROM THE RECENT PAST,

Shares of Valeant Pharmaceuticals Intl (TSE:VRX) traded down 8.74% during mid-day trading on Tuesday, reaching $194.42. The company’s

Separately, TD Securities dropped their price objective on Valeant Pharmaceuticals Intl from C$300.00 to C$285.00 and set a “buy” rating for the company in a report on Wednesday, September 30th.

We have talked about this before but things are getting ugly fast so it bears repeating. The guys at Citron are now labelled as the villains because it is they that spoiled the party for not so altruistic purposes. The talk is that “regulators” should have stepped in and put a halt to all these false (??) accusations and innuendo. There is, however, a legal defence as in suing for defamation. It has the charming attribute that unlike in most legal matters, the accused party is assumed guilty until proven innocent.  Between deep pocketed corporations this does not matter that much but not so when one of the parties is the little guy. In those cases it usually boils down to an act of extreme cowardice aimed towards muzzling the opponent.

In all cases the truth is ultimately the best defence and invariable when there is a cockroach, more are found as time moves on. Those that do the opposite, that is recommend these stocks wearing blinkers are never faulted even if, in the eyes of any prudent person, such recommendations border on the ridiculous. Above are two such recommendations from the two largest and highly respected trading outfits in Canada/US. This is not surprising as they themselves often cause the lofty levels in the first place. Like horses, that are so afraid of their own shadows, particularly when in traffic, they must wear blinkers that blind them to reality and keep pushing the “narrative”.

We had an initial bounce off the lows for VRX and at this point it is hard to tell where the stock might go. Longer-term, that is over the next year or so, we think it may go lower to about, perhaps, $55 or so. There is no complete 5-waves down let alone an a-b-c correction so there still is something missing. RSI and MACD, as well as a nice cross-over point towards the upside but, as always, discretion is the better part of valour.

Ironically Ackman’s Pershing Square hedge fund reportedly has 30% invested in VRX. He is the same guy that aggressively shorted Herbalife (HLF) on which he also lost a fortune. What goes around, comes around. There are 131 hedge funds holding about 32% of VRX stock, herding maybe?