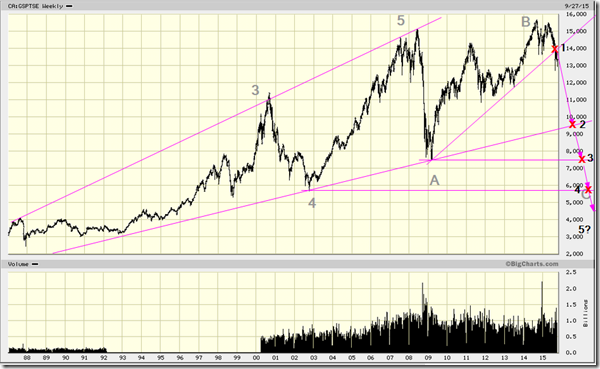 Remember the difference between first and second order errors? Not sure I do but vaguely it was that in one case your hypothesis was wrong but the conclusion was nevertheless correct and in the other case the conclusion is wrong but you throw out the correct hypothesis. In the case of the TSE our hypothesis is that we are in a big flat A-B-C and have most of C ahead of us. Best guess we are in or at the beginning of wave 3 of 3 of C.  Of course nobody believes any of this, which is why we repeat it ad nauseam.

There are a few hurdles along the way. The first one, appropriately annotated with a 1, we have already passed. Right now we are on our way to 2. In the mean time we did manage to loose 2000 points or about 15%. For a US investor you can add another 25% for the currency for a total loss of about 40% and the party has not even started in earnest.

If our hypothesis that we are in the 3d of 3 is correct, the next 3000 points will evaporate faster than lighter fluid. That (point 2) will, by the way, set us back to where we were 16 years ago. This should continue at least to point 4 but, perhaps, much further. The reason is fairly simple. Janet Yellen, who is also the head of the Bank of Canada, was recently (Sept. 17) asked if it was possible that she would keep interest rates at zero forever. She responded by saying, quote “I can’t completely rule it out but really that’s an extreme downside risk that in no way is near the center of my outlook.”  With that all economic theory is thrown out of the window, in fact the very word economy loses its meaning. Simple concepts like savings, financial risks, investments, pensions etc. etc. are reduced to rouble and the always fragile TSX will follow.