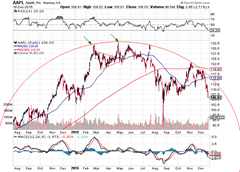 Our first sell recommendation was on February the 21ste when the stock went above $130 for the first time. At the time that was enough for one or two of my readers to call in and wonder aloud if I had taken leave of my senses, after all this company only traded at 9x future earnings, had more cash than most countries and would soon be coming out with a completely new i-whatever that would be absolutely irresistible to even the most discerning purchaser.

But then we got a clean triangle that is always a dead giveaway that you are close to the end of something and even the Gainsville boys came out with an identical conclusion. Then late August we got some sort of flash-crash which does not really count as it was over in a blink of an eye (for the record, the stock was down $42 from its peak!). The subsequent a-b-c correction brought the stock back up to about $123 just to show how persistent optimism surrounding this stock is. Now we are in some sort of a third wave, back to $106 and in a very steep part of the “rounding top”.

Institutional ownership is running at about 60% of the total float, that is Vanguard, State Street, Northern Trust, Blackrock and so on. Even the Swiss National Bank reportedly has a little more than 1 bln. worth of the stuff, its largest single foreign stock position. This is taken to be conclusive proof that the stock must go up as all these smart investors cannot be wrong. In other circles this is known as herding.

We will continue with the rounding top concept. It will get steeper so things will happen faster. As a minimum we should drop back to the $92 level and after that to about $50.