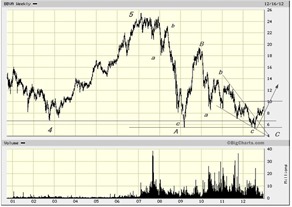 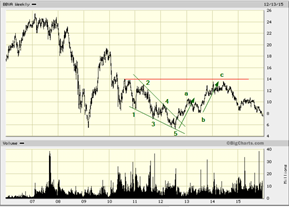 The usual then and now charts with three years in between, pretty much to the day. On a long drive recently I was listening to a radio programme that explained the 10 biggest mistakes investors just cannot stop making. Number 6 or 7, was selling your winners too soon, presumable with its counterpart of letting your losses run too long. I do not think this is necessarily a thinking error as it is more the result of your style, methodology or whatever you want to call it. It is not an error similar to Janet Yellen’s when she recently opined that the length of a bull market is not a factor in the chance of it ending. This is patent nonsense that can only come from someone who has been indoctrinated with random walk theories and does not realize that markets are very path-dependent and do not behave like dice.

In the 2012 chart we recognized that the path for BBVA (and the IBEX , EWP and Santander) for the previous two or so years had been that of a diagonal triangle, in plain English a wedge. These wedges typically occur at termination points or where the market has gone too far too fast. As a result they usually reverse course and move right back to where they started, in this example about $14 on the ADR. We suggested getting out after a 25% gain, leaving about 75% on the table. This was no doubt too early, certainly with the benefit of hindsight, but it is not an error as such because it fits our “style”.  That is be nimble and move to where the action is (expected to be). The real question is what did you do next to deploy the money.

Today we have no idea where this stock is going. Last time we were there Franco was still in charge. It will not be on our radar screen un till such time that the EW count is unequivocally clear, perhaps tomorrow, perhaps ten years from now.