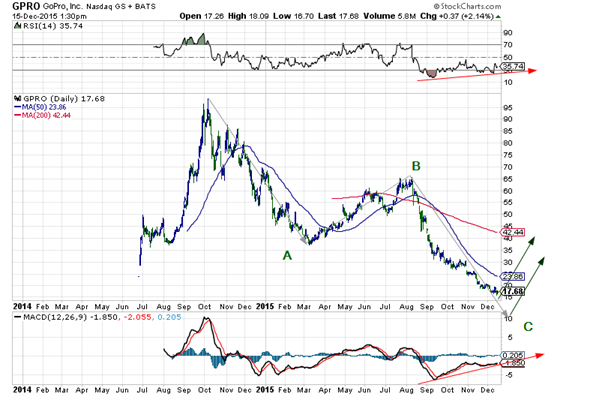 This is an A-B-C down. Often the A and C legs are equal as vectors (that is direction as well as magnitude) which could suggest that the low might even be at about $12. We have a gut feeling that that may be too low. Here are some , more objective, reasons.

1. Despite two or three downgrades the average target with 15 analysts is still at $33.

3.Short positions amount to over 31% of the company’s float –the issue price was $24

4.RSI and MACD suggest a turn is around the corner.

5. Marketing by this company is terrible, just a few tweaks could result in dramatic improvements.

6. There are rumours  that the company is an excellent take-over target, perhaps by APPLE. Where there is smoke there is fire. The capitalization is about 2.3 bln., pocket change for AAPL.

7. The C wave subdivides into 9 separate waves, equal to a 5-wave move.

In short our gut tells us this stock could double overnight. That possibility far outweighs the potential of another $4 down.