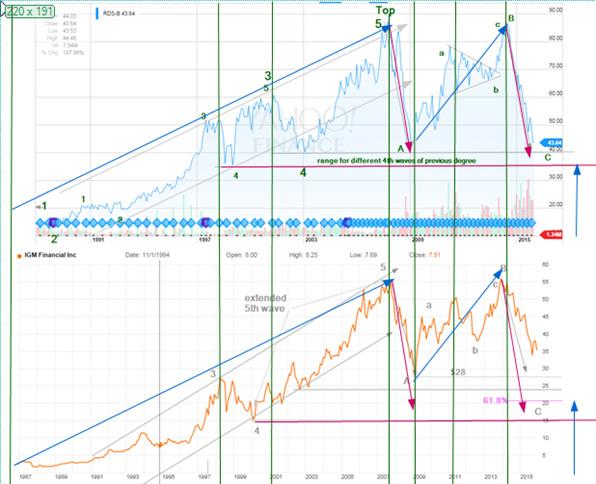 I have combined two of the last few blogs to make a point. The point being that Elliot Wave is not another branch of witchcraft; instead it is what we all have done most of our life, that is copying others which is why certain patterns develop and do so in a fairly predictable sequence. We are particularly prone to be contaminated by the mood swings of those surrounding us and consequently that manifests itself in collective highs and lows.

If you have ever wondered why it is that floor traders operating in such intense environments as the future pits (those that still exist) think nothing of walking from the coconut oil section to the long bond section, than you can stop wondering. They know nothing of either of these commodities and essentially could not care less. What they do care about is the order flow as that is all they need to get a sense of the market.

As mentioned we have both Royal Dutch a.k.a Shell and IGM, an investment dealer and mutual fund manager, in the chart above. They have absolutely nothing in common. One is huge, the other relatively small. One is in oil and transportation, the other in financial services. One has enormous infrastructural and capital investments, the other hardly anything at all. One is Dutch/English and operates around the world the other Canadian, primarily in Ontario. One deals primarily in US dollars (but also Sterling) and the other in Canadian dollars.  Given all that, it is just fascinating to see that the charts that cover the time period from 1997 to today, almost twenty years, are for all intents and purposes identical. The reason is that the world is now global and getting more global with Facebook, Twitter, the internet etc.etc. with the predictable result that we all stop thinking critically and tend to be in a similar mood.

The charts above are embellished with green, blue, red or purple and grey lines. The green ones run vertically and denote a certain point in time. The blue and red ones are vectors, they have the same direction and magnitude on both parts of the chart. All that helps to show how identical the charts in fact are.

The moral of the story is that you should not knock EW, and if in the past you were a stock picker, stop and try to become a pattern picker, there are only 13 of them.  Merry X-mas, or is that Holidays?