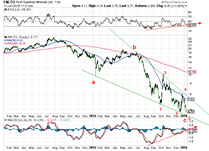 There are many rules and guidelines in EW that I do not fully comprehend. The last few years we have had an inexplicable two to three years time delay, as if everything was frozen, in old kinds of stocks. No doubt it is caused in no small degree by the Fed. intervention in the market. EW is based on the premise of free markets with a large number of players. One could argue that that premise does not hold when the Fed. (or the ECB or the PBOC etc.etc.) simple writes another cheque for X bln. when things do not work out as they want them to.

In the case of FM a very clear and well proportioned B-wave developed immediately after the lows of the great recession, peaking in 2011. From there a 5-wave down sequence should have started for wave C. It did not, it was delayed and when at last the down-leg did materialize it looks a lot more like a zig-zag A-B-C than a 5 wave C. We have precisely the same situation with RDS.B and Oil itself (see recent blog) and a few other stocks. Perhaps the B-wave, which MUST be followed by a 5-wave C, did not exist after all and the orthodox top actually occurred in 2014 instead.

In any event the targets are not materially different. We should make a new low, that is below $2.60 Of course it can always go a little further but it is impossible to slice and dice this any further. A buy below $2.60!

For the record, we first predicted this trajectory back in March 2011, without of course the extra 2/3 years, as per below; 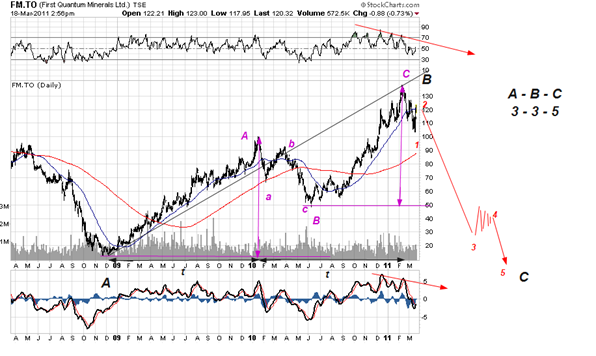 You would have saved yourself $116 or so!