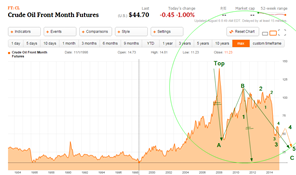 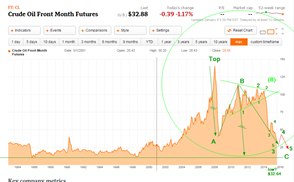 Since August oil has dropped from, roughly, $45 to $33 or about another $12. As you can see, now the A and C legs are vector equal as today’s low is on the circle that we had drawn back then. Despite that we are not at all certain that this is the bottom as there still appears to be a wave down missing. Theoretically we could solve that problem by assuming that there was a triangle B wave to begin with. It looks absolutely awful so we do not give it much weight, but still it remains a possibility that we will still get the missing waves 4 and 5 and therefore it could drop even lower to $11,23. But that is something we would not bet on at this stage.

We can show the missing waves 4 and 5 perhaps more clearly using futures; 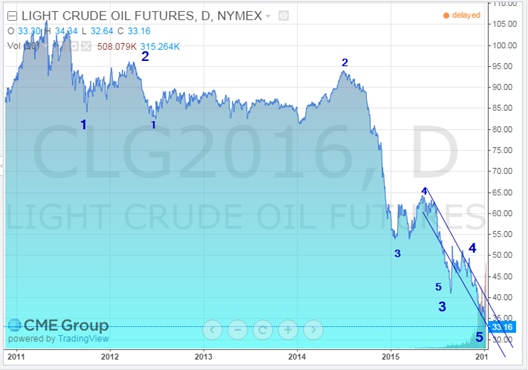 So all though we have the requisite 9 waves to make a full sequence for wave C down, the count looks weird, particularly the second wave 2 which takes two full years to unfold. It might be possible that we will still get a very elongated wave 4 followed by a slightly lower low years from now.

Royal Dutch tells us the same story. We are as low as we need to go, but could still go a little lower; 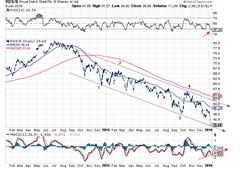 Again we are not sure which top is THE top but our preference is the first as this fits better with the rest of the world. In that event the recent wave C down should unfold in 5 waves. It is possible that we have that but a further drop to about $34 would be reasonable should de stock want to retrace 61%. With a yield of 9.5%, which no doubt will be reduced, this stock is now definitely in the buy, not sell category.