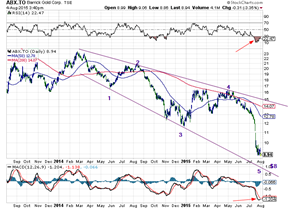 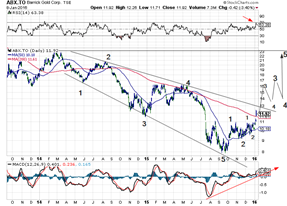 Back in August we had an $8 target for this stock, based on the diagonal triangle or wedge that appeared to be the operational pattern. The stock actually traded marginally below that level twice before starting it’s trek north. At the recent highs of $12+ you are up 50%, not a bad result.

Things might get a lot better as the minimum target for this kind of a pattern is at the starting point, that is $23 or so. If it breaks the upper downward sloping line sentiment could become a lot more positive as that would be the midpoint, roughly, of an initial 5-wave move up. Hold on.