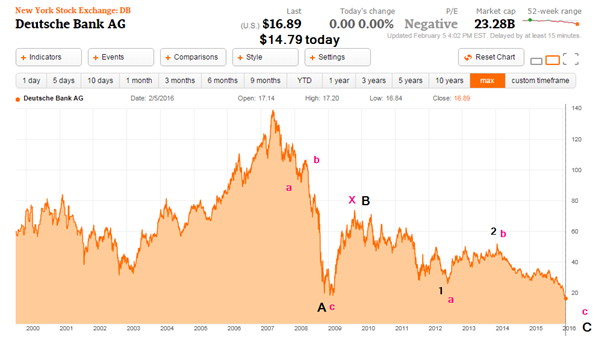 This chart is from the G&M. It does not include today’s action. The stock is now at $14.79 at the time of writing. Just in case you missed it, the stock is worth about 1/10th of what it was at the 2007 peak and is trading below the 2009 lows. What is worse is that of the two plausible EW counts, both have a way to go as we are either in wave 3 of C in an A-B-C, or we are in a 3d wave of c in a double zig-zag. Both have quite a bit further to go.

DB does not like further easing, here is what they said;

Deutsche Bank has expanded its war against the ECB to include the BOJ as well, and in a note titled "The Risks From Further ECB and BOJ Easing" it wants that with the Zero Lower Bound already breached in nearly a third of global markets, the benefits to risk assets from further easing no longer exist, and in fact it says that while central banks have hoped that such measures would "push investors out the risk spectrum" the "impact has been exactly the opposite."

Now that is refreshing. DB is in trouble. They have a large derivative book. Larger than AIG had and larger than JP Morgan. In fact it is the world’s largest at about 70 trillion gross, that is more than 20X Germany’s GDP. When it comes to gross or net the difference quickly becomes irrelevant after a first default. It is the asynchronous easing by the ECB and the BOJ relative to the Fed. that is pushing the dollar up, oil etc. down and CDS’s (Credit Default Swaps) closer to the edge.

By the way, as of today the DAX is down 27% from the peak set back in April!