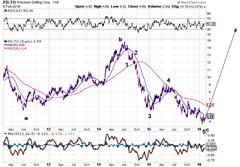 We have had this count now for at least three years. This is a fascinating company. As the name implies they are precision drillers and not a bunch of wildcatters that poke holes in the earth. They are the largest and operate in Canada and the US but also elsewhere in the world under the name of Grey Wolf International.

The EW pattern seems to be relatively clear. Going into 2009 we have a beautiful A-B-C correction that is almost certainly complete. After that a first wave up which is then retraced by an a-b-c down retracing, as is often the case, almost the entire first wave. Now we should be ready to launch wave 3 up of a new bull.

In the US there are roughly 500 rigs operating out of 1600 at the peak. In Calgary older rigs fetch little more than their scrap value. But shale wells do not last very long, so either production will decline causing prices to increase, or new wells will have to be drilled. These guys work on contract which is much better than doing it yourself with all the capex. They are very leveraged to oil. If you want to add some convexity to your portfolio this stock with a beta of 2.77 will get you started.

If you prefer to fish closer to the bottom there is also TDG, Trinidad Drilling. It has a different count but the similarities are nevertheless pretty obvious; 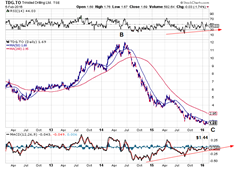 Their HQ is in Calgary, not Trinidad. See also an earlier blog. Do not confuse this stock with TDG on NY!