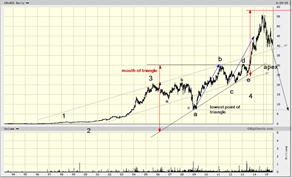 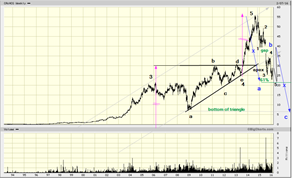 At the time the stock was around $42 or so. Recently it got to $23 or another $19. From the peak the total damage is close to the 61.8% magic Fibo retracement and consequently a bit of a bounce could be in the cards, perhaps in a minor wave 4 of 5 of 1. After that a bigger bounce which may even close the gap and then further down in wave c of this a-b-c correction which should reach the lowest point of the triangle. Reverse engineering suggest that closing the gap is attainable assuming c will equal a.

All the banks have similar patterns, mostly B-waves without triangles, but all are well on their way. This one and CWB are the furthest down and CM, Commerce , oddly enough the least. There is no reason to change the EW count at this time so we remain bearish on the group, including the insurers.