From this morning’s news;

Clearly bad news is still good news, which is why today we will take a look at BCE. This is a blue chip, widows and orphans, quasi government owned, utility type of stock. For the most part management (civil service rejects) was considered inept. They were but the monopoly shielded them from the worst consequences. Bad news was served all the time so this stock must have done very well. It did. 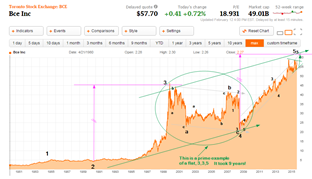 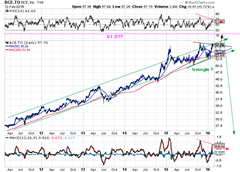 Exactly a year ago, Feb. 8 2015, we opined that this stock was a sell (see blog). It had reached a peak of $60.20, very close to that Fibo ratio of 61.8. We have trouble confirming that peak today, but despite that it does not appear to have made any progress over the year worth speaking of. A triangle remains a possibility but it is not worth betting on.

Waves 5 on normal, non-commodity stocks, are seldom longer than waves 3. That would be at the pink line. This chart is very educational. Everything within the green circle is a “flat”, the very same pattern that most stock markets are presently in, only at a higher degree. This one took 9 years so the higher degree patterns should take even longer. That flat took the stock down >55% just eyeballing it and more like 60% if you adjust for the failed 5th wave of c. Should this happen again we would be looking at $24 which is very close to the 4th of previous degree. BCE could be just one good disruptive communication adaptation away from becoming, a copper mine without a future.