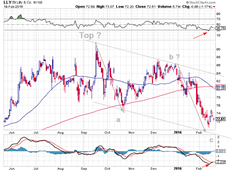 Eli Lilly is, of course, in the business of making pharmaceuticals. Among many other things it makes Cialis, which, if you haven’t gathered that yet from the constant stream of commercials on your TV, is intended to help get the investors’ hopes up.

Elliot Wave, like pharmacy, is easy to understand. The cycle is five up, three down, repeated ad infinitum. There are a number of things that we have five of (fingers, toes) but nothing comes in threes, so five is good, three is bad. That is it. Given this simplicity, it is little wonder that every Tom, Dick and Harry openly use EW or are “closet” practitioners. The Bank Credit Analyst loves the stuff, Credit Suisse, Barclays and virtually every financial institution, including even RBC, use it somewhere in their research, albeit for the most part incorrectly.

Lilly is a good example. There are a lot of ambiguities. Looking at the larger chart the stock seems to have behaved in line with most other stocks except that it peaks with technology in 2000 rather than in 2007 or so. Otherwise the count , in blue , is straightforward. Presently we should be under the peak of a big B-wave and on our way down in C – like the rest of the universe except for pharmaceuticals. However, looking at the short-term chart, we get (potentially) a decidedly different picture. This thing looks like a simple a-b-c, three wave correction! There are a number of excuses that can be brought forward to explain this contradiction but none are very elegant. So we will wait for the future to become the past and then we will predict what happened. Stay tuned. Just to be clear, we are leaning to the sell side!

For comparison we show MRK (see recent blog) again. Because size matters to some, we have tried to calibrate the two charts so they can be put side by side; 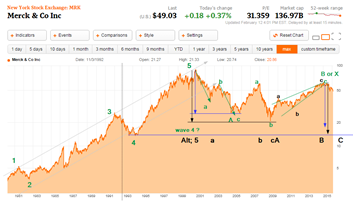 also, for completeness, we show Pfizer;

With PFE it is plausible, at least there are two different counts, to assume that the 2009 low completes an entire correction as the stock is down 75+%. With MRK that is not that obvious as the stock has not even reached the 4th wave of previous degree.