Today’s chart covers a longer period of time which creates a wider channel but otherwise the analysis is the same. Notice that the longer timeframe has two triangles in it. As stated ad nauseam in this blog, triangles occur only either as 4th waves or as B-waves. The first is a fourth wave and the higher one a b-wave within a B-wave. We assume that because of the symmetry and the fact that it is not substantial larger than 130% of the A wave. We are down about another $25 or a similar percentage from the July 21 date. From the peak the stock is down about 37% More importantly it is now below the channel. This C leg should unfold in a 5-wave sequence. Soon the first wave of that sequence should be complete as shown in this detailed chart; 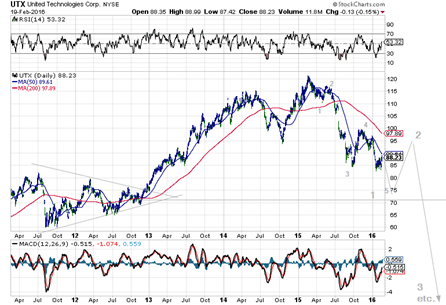 The bounce up in wave 2 of C often hits the channel from the underside at about $92 or thereabouts. Then the real fun starts in wave 3.