We were amiss in showing a new blog for Sunlife and not Manulife yesterday. We were reminded of that by the annual report that came out today. So here it is;

We have referred to this company as the canary in the coal mine. A better name would have been the turkey in the QE mine field. Unlike SLF this stock never really made it any higher than the point it reached less than a year after the “great recession”. Most “financials” went up quite a bit more, some went well beyond the 2007 highs.

These guys are very meticulous, just take a look at their lawn on Bloor street. They are also hugely inefficient, just look at the treasurer’s office in the relatively new building in the back. It is – or at least was – the size of a small football field, the largest I have ever seen for a Treasurer/CFO whatever.

The years results were OK were it not for that small and irritating item about energy;

We are not sure how they managed to lose so much. Isn’t that what mutual funds and etf’s are for?? Your client loses but not you. These guys are big in Asia, in fact that is where most of their growth comes from. If we were anticipating some sort of black swan, we would have thought that it would be coming from that direction rather than oil. May happen yet.

The stock is down more than 11% (in US$ terms) today with a C$15 handle. For full disclosure, I once worked for this company. 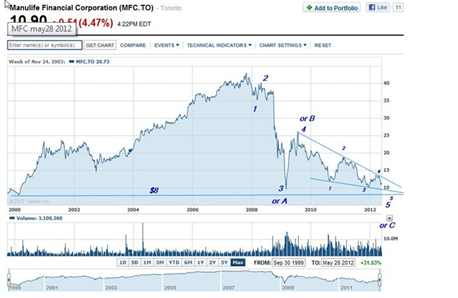 From this May 28 2012 chart a different count could be inferred. That is 5 down followed by and a-b-c up, that may or may not be complete, and now another 5 down. This is highly improbable given the action in other financial stocks.