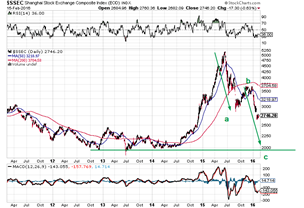 We view the rise of the Shanghai index above 5000 last year as a B-wave, a correction in other words. Consequently we expect the entire rise, and perhaps some more, to be retraced. We have heard as many excuses why this is not an overvalued market as we heard when the Nikkei traded at a p/e of, I believe, something like 70X. Other arguments are , of course, that the p/e is only one out of many metrics or that you have to do it looking forward rather than backward which puts you into a circular argument.

The reality is, according to “the Simple Truth” as per Business Week/ Bloomberg is that the p/e, even after this almost 50% drop, is still at 57X. Even if we give China a p/e equal to the average/mean of about 17x and add 7% growth, we get about 24, say 25. That is roughly, very roughly, one half of where it is now. The implication is that if the p/e were to drop to a still high but “normal” level, still double Hong Kong’s or Canada’s, the Shanghai index could fall to about 1400, besting it’s 2008 low marginally. Since this index comes from 6000, 1400 would be about 1/4 of the peak value which is not substantially different from what the Nikkei actually did during the first 13 years of it’s drop. We are great believers in the adage that there is seldom something new under the sun. For your convenience, we repeat our blog of June 26, 2015; 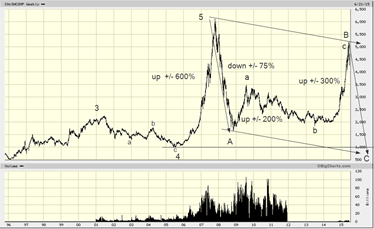