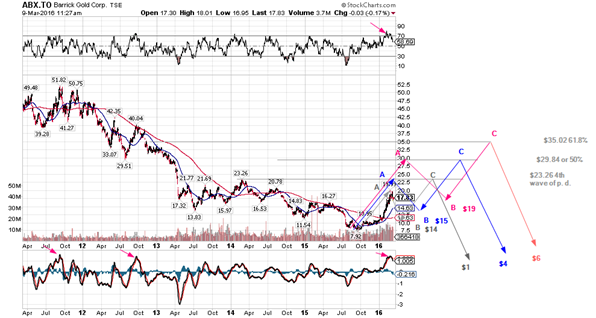 Here is a bit of reverse engineering to illustrate possible paths for this stock. We have chosen 3 possible levels for the A leg (of an A-B-C), where it is now, $23 where the 4th wave resides and $30 which represents a 50 % retracement. Furthermore we have assumed that the A and C legs will be about equal. We are preferring the blue one, simple because it is in the middle. In that scenario you would go up to $23 in the A leg, then drop to about $15 and then rise to just under $30 in the C.

After that the assumption is that the stock will fall in the same relative proportion that it did in the past four years, that is down by about 84%. This gives you the targets for the entire correction and also the in between levels where you can buy back in if you sold.

Again, this is just an attempt to create a rough roadmap. None of it may come true but it may just turn out to be more accurate than what your gold bug broker tells you.