We show Ashanti once again because it is such a remarkably good example of what Elliot Wave is all about. There are only 13 patterns in total, either up or down. The thing is that they occur in a very repetitive sequence so if you can figure out where you are you can predict where you are going. Even if there is no absolute certainty, more often than not one can make an educated guess as to the next move, even in those cases where the entire picture might not be clear. This nine plus year “flat” correction, including the move up preceding it, conforms to almost all the rules and guidelines of EW. This makes it relatively easy to predict the future which we did precisely a year ago; 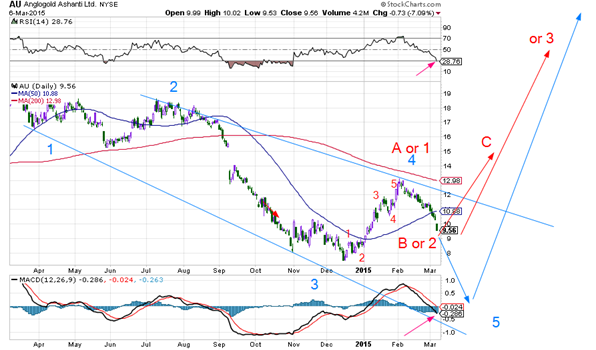 As it happens the stock followed the blue script, going down to slightly less than US$6. But from a trading point of view you had a clear roadmap of all three possibilities. From an investing perspective all three possibilities would lead, if correct, to sizeable gains from 50% to 100% to 300+%. Anyone of those would have been perfectly acceptable. We are presently at about US$13, having already reached US$14.31, a little more than 30% up in a year in the worst case, which is now negated, we think.

We would assume that this stock has now entered a new bull market. The initial target, set a year ago of $20 is therefore just a milestone on the way to higher levels. We will keep monitoring the stock as there are still bearish possibilities after $20, namely if we only just finished wave 3 of C and are still in 4 of C (not of 4 of 5 of C).

By the way, there is no difference between trading and investing other than an always arbitrary timeframe.