See our previous detailed report on this stock. We recommended a buy at the $23 level or slightly lower for a target where the gap would be closed, possible, that is at about $40. We did not go that little bit lower but it is, of course, not a good approach to forego buying for the sake of a dollar or two to miss the boat for $17 potentially. Anyway, here are the charts again; 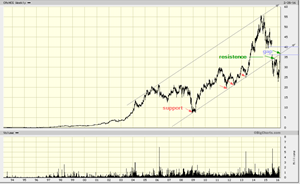 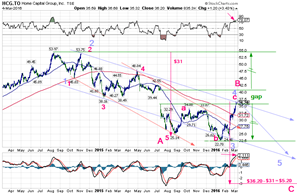 We were toying with the idea that the gap might be closed. In hindsight we are not so sure. All too often support on the way up becomes resistance on the way down. Here at $36.20 we are marginally into the gap but also at the trend line of the multi-year channel. You are up roughly 50% so this is the appropriate time to get out.

It is possible that from the peak we are doing an initial 5-wave sequence that is confined by the blue channel. A, in my view, better take would be that we are actually in the red channel and that the low of wave 1 or A down was made several months ago in August. From there a large irregular flat is almost complete to make wave B, which explains why we did not make a marginally lower low. This fits well with the notion that the gap, in green, is often in the middle (of the extremes, regardless of the count). The RSI and MACD are soon to roll-over and if wave C (next) would equal A then we are looking at a target of about $5, essentially the same as we calculated in our previous blog on this stock.

Mr. Soloway who started with the company when assets were at $51 mln. has announced his departure as CEO after 30 years. The company is now a $25 bln. outfit (growth of 490X). The soon to be new CEO joined the company in 2007. New brooms sweep clean but only the future will tell if this one does.