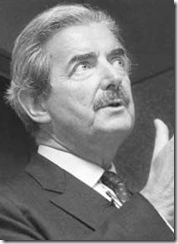 Barclay’s Bank is not doing all that well to put it mildly.

I try not to get personal in this blog having already been charged with a defamation suit by a credit union, but here it is hard not to. I admire very few bankers,  Matthew Barrett and Walter Wriston (FNCB), with whom I actually once had lunch in NY, are the exceptions. Mr. Barrett I know absolutely nothing about, other than that he has this charisma and aristocratic appearance of David Niven/Rhett Butler. After failing to merge BMO with RBC – something many BMO employees are still grateful for – he decided to retire at 55 only to be asked to head Barclay’s. From the chart it is clear that he did a stellar job or was lucky to be there during most of the 5th wave. Soon after leaving the stock is decimated.

The big question now is what is in store for this stock? Since the lows of 2009 it has been tracing out some pattern that certainly looks like a triangle. This is a continuation pattern, that is to say that you will continue in the same direction coming out of the pattern as when going into it. That is down. But how much lower than $2.99 will it have to go? The triangle’s size suggests that the stock could go below zero, which, even in these times, is not possible. Also the first leg up, a, looks like it is a 5-wave affair which cannot be in a triangle. We would therefore go with the wave1, wave 2 a-b-c idea as shown in blue. If correct, the stock should be a buy around $4.50 or so.

Maybe that other Canadian, Mark Carney will be available in a few years to run this bank.

For the record, below is a chart of the BMO, same size for better comparison. It is the waves that count.