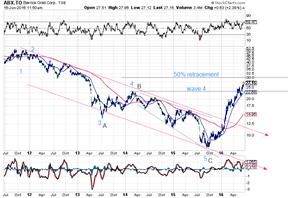 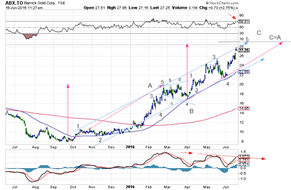 ABX has moved up at a much faster speed than we ever expected. Typically there should be a noticeable pause somewhere, usually near the middle, of the counter-trend correction. We have now almost retraced 50%, far more than most other gold stocks so we have to assume that our analysis was wrong.

Initially we expected a pull back after the first leg up to about $17. What may have happened is that the pull back (wave b in an a-b-c) simple moved sideways rather than down. Possible this was an expanding triangle wave b that lasted about 5 weeks. If c started from that low point, equality between c and a would get us to somewhere near $28/$30 in the next few days, if not done already. If so this correction would have lasted about 8 months which is very short compared to the 4 years it took for the stock to find a bottom.

By comparison we show the ZJG, the BMO junior gold ETF. 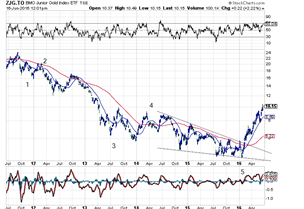 This one is also on a semi-log scale but the stock only just made a 30% retracement. Clearly ABX is ahead of itself and today’s action up $2 in the morning (when the charts were made) and down $2 in the afternoon may be a warning that it is peaking at some degree.