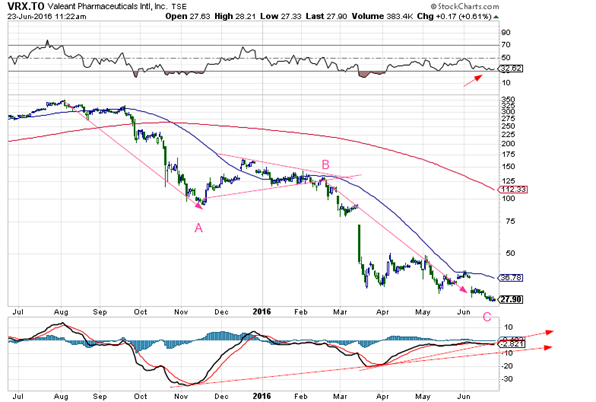 Valeant has now dropped from $350 to $27, or slightly more than 92%. This is normally enough, at least for a little while, to create bottom fishing interest. At this point one could argue that the correction could be complete as C now equals A and then some. Even so the low, to make a full circle, is more in the order of $9 or so.

The Globe and Mail recently came out with an article comparing this company with Nortel. When things get that far it is often time to be a little contrarian and we would suggest starting to nibble at this stock. The fourth wave of previous degree  starts at about $50 and it would not be surprising to see this stock move up to that level, which essentially would imply a doubling of your money. Much higher levels are, of course, possible but we would put in the sell order after each buy as things may not allow the time to think.