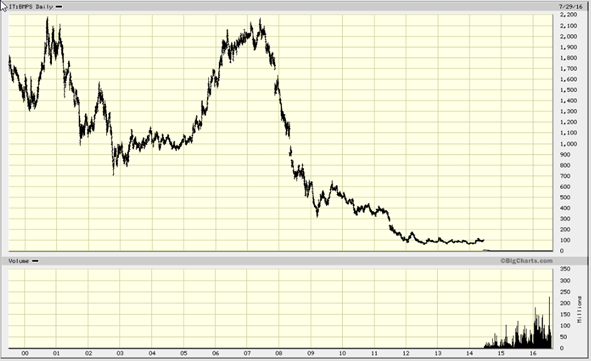 You have to look closely at the chart to see that this stock, here as quoted on the Milan exchange, is trading essentially at zero. It failed miserable on the most recent “stress tests” and the future looks less than promising.

This is Italy’s third largest bank and also the Worlds oldest. As you can see from the rather stoic entrance of the headquarters, this bank’s origins lie in what is now best known as Tuscany. It received it’s “letters” back in 1472. Presumable the first 500 or so years reflected the pastoral setting and went by unremarkably. That changed in 1999 when the bank was first listed on the Italian stock exchange and became global. Just like the tower of Pisa, these guys soon could not think straight and got involved in numerous, very large, financial transactions that became almost fatal. On top of that they got carried away with derivatives costing them perhaps as much as 3/4 of a billion Euros in hidden losses. In a matter of 10 to 15 years they were able to negate the first 500.

There is nothing all that surprising in this behaviour. It happens all over the place where financial institutions loose their anchor and go on a dangerous tangent. Even some of the credit unions here have been known to fall prey to this kind of hubris or megalomania. In that respect Tuscany and North York have a lot in common.